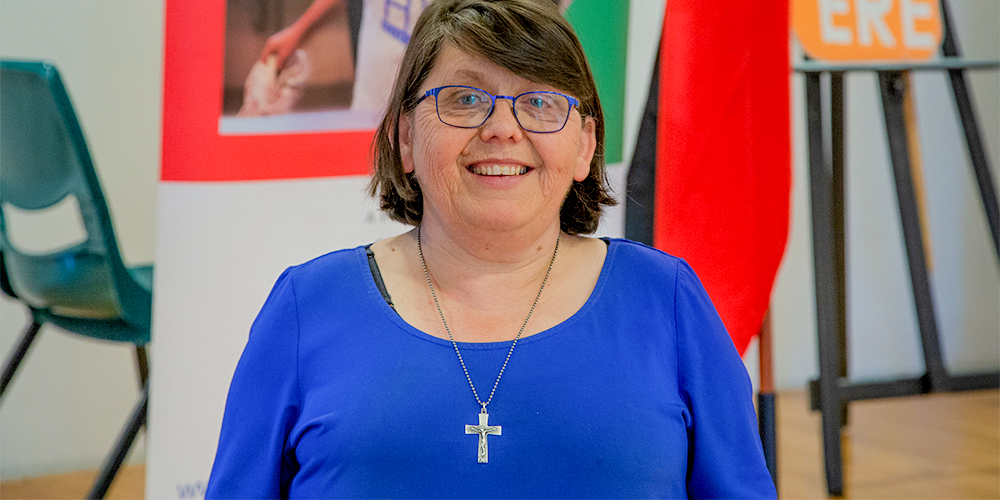 This new challenge is an exciting one for Sr. Louise who believes it is “a sacred space to journey with each of the sisters and facilitate together the ministry that happens in Australia, Samoa and the Solomon Islands.”

“There’s also a tinge of sadness, because I’ve loved what I’ve been doing in the Parramatta Diocese’s (in western Sydney) Social Justice Office, all the networks, relationships and support that make it a shared mission. It’s been a very life-giving and rewarding ministry for me personally.

Sr Louise grew up in the south-eastern suburbs of Melbourne, and attended high school at Mater Christi College in Belgrave, which was run by the Sisters of the Good Samaritan. As a teenager, she was involved in her parish youth group, became a member of the Antioch Youth Movement and helped the Salesian Sisters run summer and winter camps for young people.

“I was very inspired by the formation house of the Salesian Sisters in my parish of St Jude’s in Scoresby (Melbourne’s eastern suburbs). There were young people entering religious life, and I was challenged and inspired by those young women, and there was a connection to the story of Don Bosco and his work for young people. 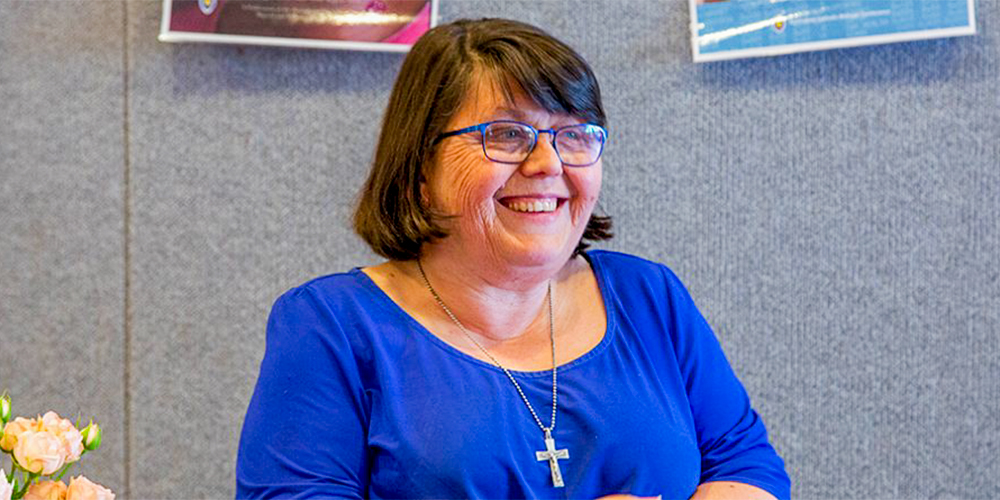 After high school, Sr Louise studied at teachers’ college, and in her third year, realised that a call to religious life was something she wanted to do. She professed her final vows in Melbourne in January 1996.

In 1990, Sr Louise moved to Sydney to teach at St John Bosco Primary School in Engadine before working in youth ministry at the Don Bosco Youth Centre in St Marys. After some years in that capacity she returned to Melbourne to become the director of a long-day child care centre and then spent time in Adelaide completing a graduate diploma in Indigenous studies and assisting with a program for Indigenous secondary school students.

In January 2012, Sr Louise returned to Sydney to the Salesian Sisters Community at St Marys and lept at the chance to become the Diocesan Social Justice Coordinator. It was a natural continuation of the roles she had been serving in at the youth centre and with young Indigenous.She also spent time as the Caritas Australia Diocesan Director as well as regulary helping launch the annual Project Compassion fundraising initiative.

She has been successful in supporting and resourcing groups and parishes in the diocese to achieve social justice goals, particularly with regard to the concerns of asylum seekers and refugees, as well as networking with schools, parishes and agencies across Western Sydney with a passion for social justice.

“One exciting time was World Youth Day 2013 when we went to Rio, and we’d had the mission experience with Caritas Peru in Lima. Seeing the young people of the Parramatta diocese being able to experience the work of Caritas face-to-face.”

“What’s been inspiring for me has been the teachers in the schools that are giving their extra time to animate social justice, or the people in parishes that are leading social justice groups or involved in those groups” she added. 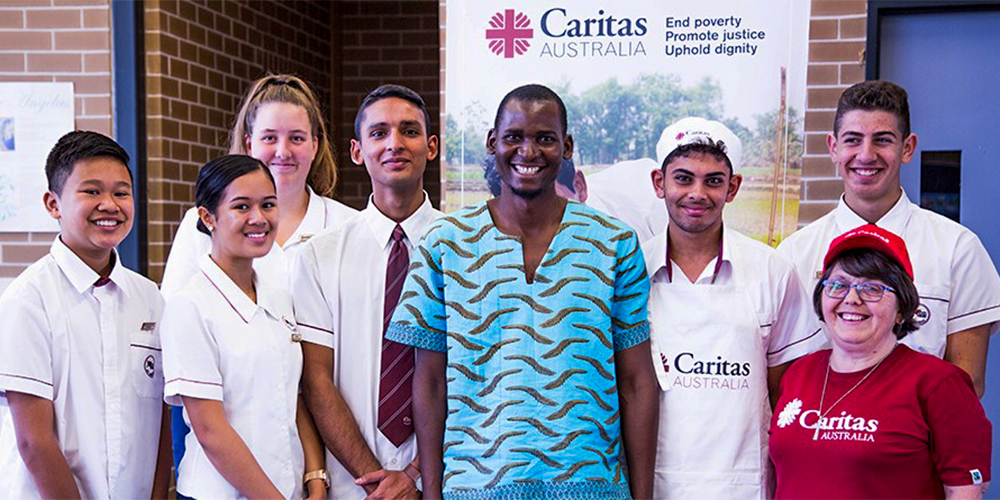 Sr Louise has a passionate commitment to working with young people and worked tirelessly to improve the lives of those less privledged.

During a farewell afternoon tea held for Sr Louise on Tuesday 22 October at St Patrick’s Cathedral Hall, Parramatta, several representatives of the networks she has formed and the projects she has championed were in attendance and gave thanks for her ministry.

Fr Paul Marshall, parish priest of Our Lady, Queen of Peace, Greystanes, spoke on behalf of parishes: “Thank you for your total dedication over the years in various ministries, and I want to pay a really special tribute to you for all you’ve done for us in terms of raising consciousness and awareness about issues that really face us as a society and the Church,” he said.

Maeve Brown, Manager of the Jesuit Refugee Services said “Most of all, she’s clearly working out of love, the love of God we find in one another, in each other in a community, with our neighbours and also in welcoming a stranger, and I think that’s been really clear in all of the work that I’ve been a part of with Louise,” she said. 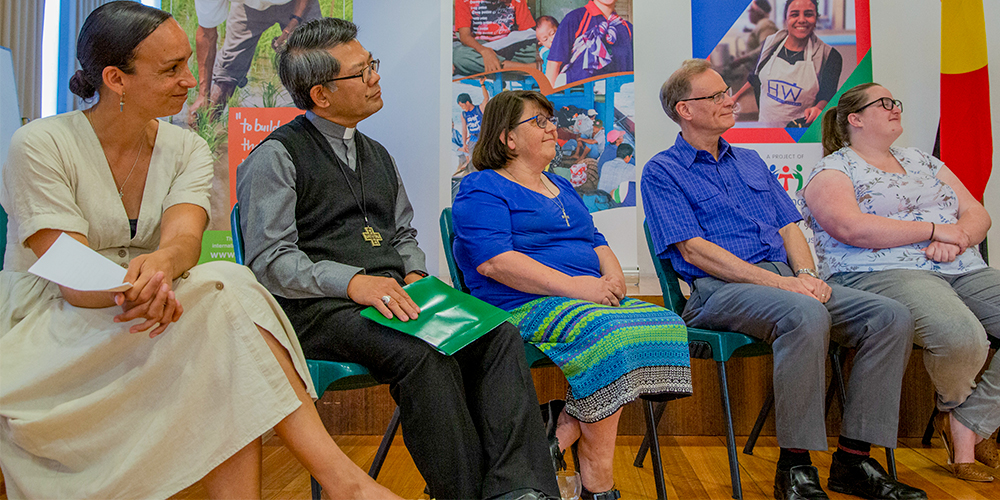 There were plenty of earnestly spoken platitudes for Sr Louise's hard work!

Bishop Vincent Long expressed a tinge of sadness at his forced farewell to Sr Louise. “It is with a tinge of sadness that we’ve come here to farewell Sr Louise, and wish her every blessing for her new responsibility. They often say ‘good things some in small packages’, and it’s so true of Sr Louise. What a dynamo you are, with a heart and passion for justice.”

“Louise, your seven years with us have been like the biblical seven fat years, and I hope it’s not followed by the seven lean years, but I know that you’ve set a great example of a heart for justice and a high benchmark for others to emulate.”

To cap everything off, Sr Louise added, “I will miss the people and the relationships. “I’ll miss all the networks with the various agencies and schools and networks of the social justice office.

“One of the big things I’ll miss is the vibrancy. The Church in Western Sydney is a very vibrant Church because it is multicultural and because it is young. There’s a lot of commitment to mission from people. Not just Bishop Vincent, but I think a lot of people in the diocese have a good model of church for the future.” 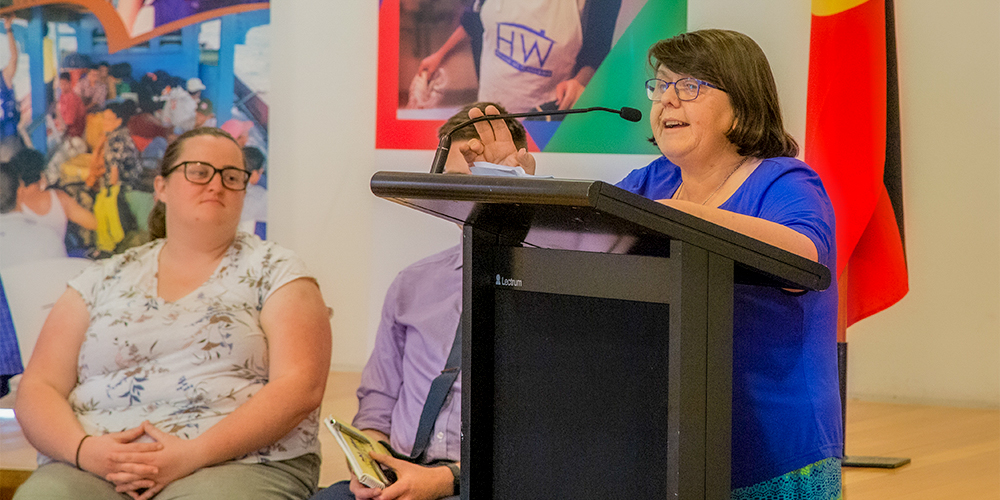 Sr. Louise thanks all those who have made her time in Parramatta so fulfilling. 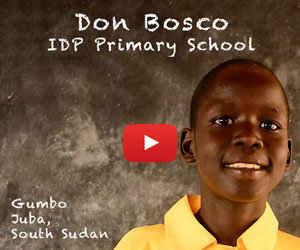